Apostolicity of Membership and Origin

Apostolicity of membership, which is sometimes referred to as apostolicity of origin,[1] means that the visible society of the Church – hierarchy and laity - is numerically one[2] and the same moral body that existed at the time of the Apostles.[3]

“Apostolicity of membership means that the Church in any given age is and remains numerically the same society as that planted by the apostles. (…) A moral body, despite the fact that it constantly undergoes change and renovation in its personnel, remains numerically the same moral body so long as it retains the same social structure and the same authority. This should be clear from the fact that corporations like General Motors, or RCA Victor, or nations like the United States, France, or Switzerland, remain the same corporate or political entities, and are represented before national or international tribunals as the same moral body even though there is vast fluctuation in their personnel.”[4]

In his celebrated book, De Ecclesia Christi, Cardinal Billot explains that the visible continuity of the Church was considered by the Fathers as the principle mark (or note) of the Church, and the one they most often appealed to against the heretics: 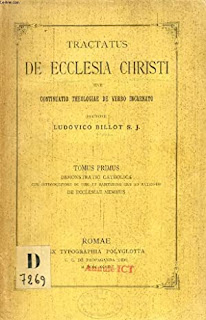 “The true Church of Christ is essentially apostolic, inasmuch as it retains perforce until the end of time visible continuity with that primitive Church which the apostles founded.   And because this sort of continuity is so proper to her that it cannot be had in common with any false sect, it has the force and figure of a positive Note (i.e., mark), and indeed of that principle Note which the Fathers used the most.  This Note, moreover, shines forth so much the more splendidly in the Roman communion, as it is manifestly shown to be lacking in all others.  “It moves us greatly,” St. Augustine said, “that our Lord, whom it would be sacrilegious and impious to disbelieve, in the last words that he spoke on earth, left the primitive Church his last and most salutary instructions.  For, having said these things, he soon ascended into heaven.  He wished to fortify our ears in advance against those who he predicted would rise up in the times to come and say, Behold, here is Christ; behold, he is there [Mt. 24:23].  He warned us not to believe such people…” (…) To these last words of our Savior [i.e., his prediction that false Christs and prophets will arise] belong all those things which we are told He said during those forty days when ‘he showed himself living after his Passion, appearing to them and speaking of the kingdom of God.’  To these words especially belong those which Matthew commemorates at the conclusion of his Gospel, where Jesus, having returned to life, says to the eleven: All power is given me in heaven and on earth.  Go ye therefore and teach all nations, baptizing them…, behold I am with you all days, even to the consummation of the world.  And in these words He spoke unambiguously about the true and genuine Church, clearly indicating that until the end of time she would retain visible continuity, without any rupture or interpolation, with the Church that would soon be begun by his Apostles. (…)

“Indeed, the Church with which He promised that he would remain, and which for this reason is said to be the true Church of Christ, was to see no end in this world, until she should see the end of this world. (…) Moreover, this sort of continuity must be taken in the strict sense, as excluding the possibility of any rupture or interpolation whatsoever.  For, by saying, ‘I am with you all days,’ he precludes any interruption at all, no matter how slight, even of one day or one instant; he has left no gap for innovators to legitimize the founding of their sects.  Again, this continuity is visible, both because it begins with visible, designated individuals, and also because it is established among men and for the sake of men, who can hardly judge the continuity of a society except in the way that they judge the continuity of a river, whose successive parts are visibly connected; finally, it is visible because it must be in agreement with the nature of the Church herself, which, as we have demonstrated above (Question 1, Thesis II), is both materially and formally visible[5] by the institution of Christ.  Finally, this visible continuity carries with itself all the properties of the true Church, since with this continuity comes the assistance of Christ.  The assistance of Christ means absolute indefectibility, and cannot belong to any false Church, as is evident from the terms themselves.  Therefore, from first to last, the apostolicity here set forth constitutes a positive Note par excellence.  (…) Moreover, among the other positive Notes of the Church, this continuity with the apostles has always held a certain primacy in the common usage of the Fathers, for no other Note is more obvious, and no other betrays its presence or absence by facts that are more material and, so to speak, tangible. Succession in the Church consists in the conservation of a numerically identical social body that subsists at all times, so that no fraud could be suspected in the transmission of its name.” [6]

It is impossible to maintain that the Church was one visible society from the time of the Apostles until the death of Pius XII, and then claim the same visible society elected a series of false Popes and morphed into a New Church without denying the indefectibility of the Church.  Just as in the days of the Fathers, this “Note par excellance” proves that the Church which recognizes Francis as Pope today is the true Church founded by Christ Church.

This "Note par excellance" also proves that none of the Sedevacantist sects – including those who have elected their own Antipope[7] - have any claim to being the Church founded by Christ, since none of them are numerically one visible society with the Church that existed at the time of Pius XII and throughout the centuries. Van Noort comments on this very point: 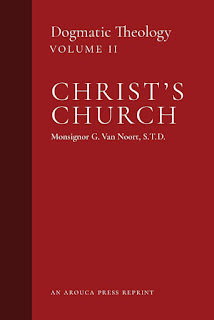 “Please note the word, numerically the same society. A mere specific likeness would never satisfy the requirements of apostolicity. Just for the sake of argument – even though it cannot actually happen – let us conjure up some church which would bear a merely specific likeness to Christ’s Church; a church which would be like it in all respects except numerical identity.  Imagine, now, that the Church planted by the apostles has perished utterly.  Imagine – whether you make it the year 600, 1500, or 3000 – that all its members have deserted.  Imagine, furthermore, that out of this totally crumpled society a fresh and vigorous society springs up and then, after a time, is remodeled perfectly to meet the blueprints of the ancient but now perished apostolic structure.

“Such a process would never yield a church that was genuinely apostolic, that is, numerically one and the same society which actually existed under the apostles’ personal rule.  There would be a brand new society, studiously copied from a model long since extinct.  The new church might be a decent imitation.  It might be a caricature.  One thing it definitely would not be is apostolic.” [8]

Furthermore, the first Sedevacantist sects did not spring up until the 1970s. If the visible society defected in 1958 or 1965, as they claim, where was the true Church during the intervening years? As Billot explained, Christ’s promise to be with the visible Church all days, even till the consummation of the world, “precludes any interruption at all, no matter how slight, even of one day or one instant; he has left no gap for innovators [Sedevacantists] to legitimize the founding of their sects.”

Just as apostolicity of membership (or origin) disproved the claims of the heretics in the early centuries, so too does it disprove the claim of the heretics of our day – chief of whom are, without question, the Sedevacantists.

[2] “Numerically one” means one and the same moral body, even though the individuals that make up the body will continuously be replaced by others over the course of time.

[5] As we saw in Chapter 1, what makes the Church formally visible are her marks (or notes).

[7]  Sedevacantism has produced well over a dozen antipopes.  Some have been “elected” by other Sedevacantists, and others claim to have been appointed Pope directly by God or the Blessed Mother.