John Salza Responds to Peter Kwasniewski on the SSPX

John Salza Responds to Peter Kwasniewski on the SSPX

Following is my response to Peter Kwasniewski’s hit-and-run post about my January 9, 2023 interview with Matt Fradd on the SSPX.

Before addressing his points, notice that Peter admits he only “listened to about an hour” of my three hour and fifteen-minute interview, but then provides a laundry list of points he claims I did not cover or failed to distinguish, again, even though he did not listen to over 2/3rds of the interview, and which actually did include discussion on many of the points he claims I missed (i.e, the Magisterium’s levels of authority, obedience, the problems with Pope Francis, etc). Evidently Peter thinks so highly of himself that he believes he can publicly refute his opponents’ arguments without listening to their entire arguments. This says a lot about his approach to the issue.

1 – Peter claims I don’t distinguish between Sacrosanctum Concilium and the Novus Ordo, which he says “is a distinction that is crucial to the entire debate.” What exactly is the debate that Peter is referring to? After all, he didn’t listen to two hours and fifteen minutes of the interview. Is Peter referring to the debate concerning the necessity of canonical mission? Jurisdiction? Incardination? Schism? Excommunication? The 1988 consecrations? The SSPX’s self-erected tribunal? Again, what debate is Peter referring to? If Peter were actually familiar with my work, he would know that I have in fact addressed the distinction between what the Council Fathers willed through Sacrosanctum Concilium, and what was actually implemented in most dioceses. In fact, I just publicly addressed this very issue at my recent talk at Pioneer Catholic in November, two months ago. Of course, the distinction between S.C. and the N.O. is not relevant to the canonical status of the SSPX.

2 – Peter says “it seems” as if I don’t make distinctions between the Magisterium and its levels of authority, and the possibility of error in non-infallible contexts (I suppose you need to say “it seems” when you only listen to a fraction of your opponent’s position and then try to critique it anyway). Peter, of course, is shooting in the dark. Not only did Robert Siscoe and I devote hundreds of pages to this very issue in True or False Pope?, but I actually addressed the differences between the three categories of Magisterial teaching in the Profession of Faith (1989) in the Fradd interview in question! – you know, the part that Peter did not listen to. The real question is whether Peter understands what the Roman Catholic Church is, and whether he believes that clergy do not have to be part of the juridical structure of the Church, or be rightly ordained and sent by the Church, to be legitimate Catholic ministers, since the Council of Trent anathematizes those who hold that position. That question was at the center of my interview with Fradd, which Peter predictably avoids. Of course, the distinction between the levels of Magisterial authority and required assent is not relevant to the canonical status of the SSPX either.

3 – Peter criticizes me for telling people to go to their bishops to get a judgment of whether they can satisfy their Sunday obligation by assisting at SSPX Masses. In other words, he claims that Catholics are not bound to submit to the legal judgments of their bishops on a matter that is within the scope of their authority (i.e., determining which Masses satisfy the Sunday obligation). Like most extreme traditionalists who have embraced the Liberalism of the Right, Peter places his judgment above the judgment of legitimate, ecclesiastical authority when he feels the judgment is not “Catholic.” Notice Peter says a bishop’s judgment “is not automatically Catholic,” but he fails to explain what he means by “Catholic.” Of course, “Catholic” here would mean the prohibition of assisting at an illicit Mass offered by an illicitly ordained priest in an illicit chapel, as two millennia of Catholic tradition teach us.

In reality, there is nothing Catholic about Peter’s cavalier attitude toward Catholic bishops and their right to make judgments about matters which are in the scope of their authority. Presumably Peter’s attitude is rooted in his erroneous understanding of what the Roman Catholic Church is, which the extreme traditionalists have redefined as the body of those who “profess the true Faith” (which, for them, means those who attend the TLM and reject the Novus Ordo, as Peter does).

4 – Peter actually claims that I speak as if we can “completely trust Pope Francis” and “follow his teaching without hesitation.” Of course, if Peter had listened to the other 135 minutes of the interview, he would have heard me express my serious reservations about this Pontificate, and even acknowledge its “grave errors.” And if Peter were even remotely familiar with my work, he would know that I have been fighting against the Liberal errors of the last three Pontificates (and have been doing so long before Peter came on the scene). He also arrogantly runs his mouth by stating “I should make an appointment with reality by picking up the book ‘Defending the Faith against Present Heresies’” (Arouca). Once again, Peter is not only able to know his opponents’ arguments without listening to their interviews, but also know what books his opponents have and have not read. It is Peter who needs an appointment with reality, nay, humility.

5 – Peter criticizes me for my comments on obedience (you know, the ones I made during the less than 1/3 of the interview that Peter listened to) and how I have failed to understand the difficulties Catholics are facing with trying to be obedient in the face of reckless prelates. Of course, anyone even remotely familiar with my work knows how I have highlighted this very issue, and done my best to help Catholics navigate the crisis without leaving the Roman Catholic Church, which so many so-called traditionalists have done. We even devote an entire chapter to this issue in True or False Pope? in our chapter called We Recognize and Resist. Once again, Peter makes unfair characterizations of an interview he didn’t listen to, and frankly does not appear to be familiar with my work at all.

6 – Finally, Peter adds an “Update” (did he listen to the rest of the interview?) in which he claims I limit my analysis to the aesthetics of the Mass (Old vs. New) and overlooked the theological differences between the Old and New rites. This is another unfair characterization of my position. First, in the interview, I was not presenting a comparative liturgiology or giving an in-depth analysis of the theological issues concerning the rites (Fradd and I hardly spent any time on the theology of the Mass, although Peter would not know that because he didn’t listen to most of the interview). Rather, my point was to underscore the error of our age, namely, that Catholics are making the 1962 Missal the sine qua non of authentic Catholicism without regard to whether the minister who celebrates the rite is juridically united to the Church, with a canonical mission from the Church, and has the faculty to say Mass in the first place. This was one of the key issues of my interview (which I emphasized in the first hour) which, again, Peter predictably does not address.

In summary, it appears that Peter is quite comfortable with attempting to publicly refute the content of interviews he doesn’t actually listen to. Of course, Peter impeaches his own testimony by admitting the same (imagine cross-examining an expert witness who admits he didn’t read the opposition’s reports! The judge would disqualify him immediately, if not hold him in contempt). It also appears that Peter has bought into some of the more superficial arguments of the traditionalist movement, and may not know as much as he thinks he does or would have us all believe. Unfortunately, this is the type of arrogance I consistently encounter among the extreme traditionalists. 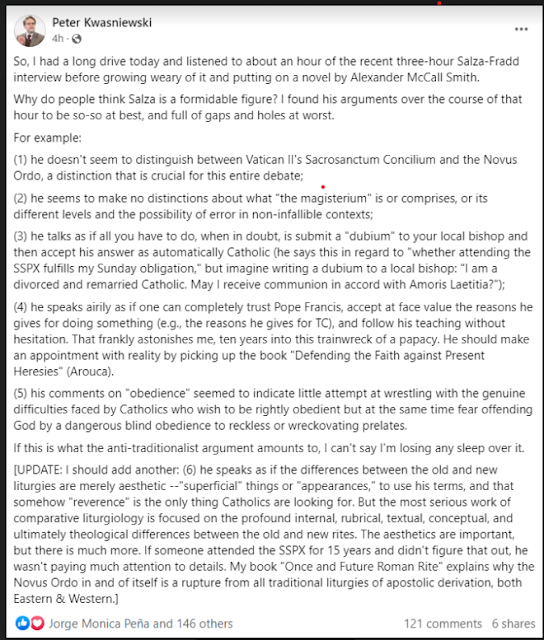 If Dr. Kwasneiwski doesn't believe there is anything wrong with the SSPX's actions, that implies that the FSSP, ICKSP etc are foolish for seeking incardination with diocesan bishops. People think that the SSPX and the Ecclesia Dei groups hold the same beliefs. A few individual Ecclesia Dei priests might, but the majority have specifically chosen NOT to be in the SSPX, because they understand the Tradition of the Church teaches it is a grave sin for priests to operate without the permission of the local bishop.

“Therefore, We urge you with the greatest enthusiasm to give support strongly and constantly to your legitimate shepherds who have received a legitimate mission from this Apostolic See.” - Bl. Pius IX, Graves Ac Diuturnae

"They [Catholics] should not have any dealings or meetings with usurping priests and apostates from the faith who dare to exercise the duties of an ecclesiastical minister without possessing a legitimate mission or any jurisdiction." - ibid.

I cannot find the Kwasniewski article anywhere online. Can you provide a link to the "hit-and-run post"? Or, did he take it down as a result of your response?

The Kwasniewski posted has now been added to the article.