Kennedy Hall Backed Out of Debating Salza, then Lied about it

In Defense of Matt Fradd and John Salza:
Kennedy Hall Backed Out of Debating Salza, then Lied about it

The purpose of this piece is to protect the reputations of Matt Fradd and John Salza against the defamatory statements that Kennedy Hall has spread about them on social media. We hope that Mr. Hall will remove his libelous statements, as Mr. Fradd has asked him to do, in Catholic charity, for the sake of all parties involved.

After John Salza appeared on Pints with Aquinas with Matt Fradd (on January 9, 2023), Kennedy Hall tweeted the following:

“Just an FYI, I agreed to debate John Salza, but he backed out after I agreed … Fradd had him on anyway.” (January 9, 2023; emphasis added)

Hall had also tweeted the following:

“I was told by Salza that I had to do it by October 8 or he couldn’t debate me until April 2023 because he would be busy with tax season (he is a tax lawyer). I said okay, we can debate in April, as I am not free that week. He wouldn’t budge” (emphasis added).

On January 10, 2023, Matt Fradd sent Kennedy Hall an email in which Fradd asks Hall to remove his false statements, and his email proves that Hall lied about the following:

As you can see from Fradd’s January 10, 2023 email below, the following facts are established:

1.   Kennedy Hall backed out of debating Salza, and even attempted to poison Salza in Fradd’s eyes by referring to Salza’s debate requests as “crazy” and “whacky,” and calling him a man of “ill-will” and “toxic,” and that “every serious intellectual in his circles” advised Hall to “stay away” from Salza. In fact, as you will see highlighted below, Hall explicitly stated the following: “I will decline debating him, and he can say ‘Kennedy declined to debate me.”

2.   Through Fradd, Salza offered Hall additional dates of November 4 and 11 for the debate, even though Hall claims Salza “wouldn’t budge” on the October 8 date.

3.   Thus, Fradd offered Hall the opportunity to debate Salza well beyond October 8, specifically on November 4 or 11, before he “had him on” his show.

Following is the email Matt Fradd sent to Kennedy Hall on January 10, 2023:

It has come to my attention that you have been saying on Twitter that you only declined to debate John because he refused to pick any time after Oct 8th (until April 2023).

You also tweeted, "Just and FYI, I agreed to debate John Salza, but he backed out after I agreed ... Fradd had him on anyway."

See the email correspondence below where John (through my assistant, Melanie) offered to debate you on Nov 4th or 11th and you declined, saying, "I will decline debating him, and he can say 'Kennedy declined to debate me.'"

For the sake of my professional reputation and to maintain the trust of my past and future guests, I ask you to remove the tweets containing false information and to set the record straight by stating the truth.

Because John's personal reputation is also at issue here I am forwarding this email to him for his records to allow him to defend his reputation as he sees fit. 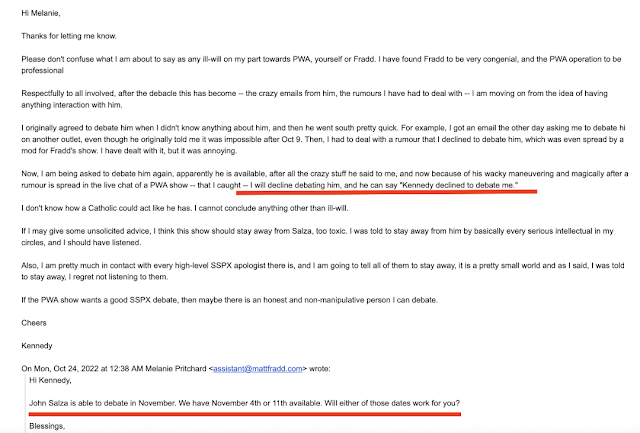 As you can see, Kennedy Hall publicly lied about the following:

Truth: “I will decline debating him, and he can say ‘Kennedy declined to debate me.” (Hall, October 2022)

Truth: “John Salza is able to debate in November. We have November 4th or 11th available. Will either of those dates work for you?” (Fradd’s email to Hall, October 2022).

3.      Lie: “Fradd had him on anyway” – suggesting that Fradd did not give Hall the opportunity to debate Salza any time after October 8.

Truth: Fradd told Hall that Salza was able to debate in November and gave Hall dates of November 4 and 11.

In summary, Kennedy Hall has not only publicly borne false witness against Matt Fradd and John Salza, but has also engaged in calumny against Salza by attempting to harm his reputation in Fradd’s eyes. Obviously, Hall not only did not want to debate Salza, but also hoped to prevent Salza from appearing on Fradd’s show to expose the errors of the SSPX, by attempting to characterize Salza as “crazy” and “whacky” and a “toxic” man of “ill-will,” so that Fradd would “stay away from him.”

We sincerely hope that Kennedy Hall retracts his slanderous statements, for the benefit of all parties. We also hope that if Hall continues to defend the Society of St. Pius X publicly, he avoids using his ad hominem approach and instead directly address the merits of his opponents’ arguments, using theology and canon law.