"I say that manifest heretics, unless they are denounced by name, or themselves depart from the Church, retain their jurisdiction and validly absolve.  This is proved by the Bull of Martin V, Ad evitanda scandala, [which reads thus]:

'To avoid the scandals and the many perils that can befall timorous consciences, we mercifully grant to the faithful of Christ, by the force of this decree (tenore praesentium), that henceforth no one will be obliged, under the pretext of any sentence or ecclesiastical censure generally promulgated by law or by man, to avoid the communion of any person, in the administration or reception of the Sacraments, or in any other matters sacred or profane, or to eschew the person, or to observe any ecclesiastical interdict, unless a sentence or censure of this kind shall have been published by a judge, and denounced specially and expressly, whether against a person, or a college, or university, or church, or a certain place or territory.  Neither the Apostolic Constitutions, nor any other laws remain in force to the contrary.'

"Then [the Bull] lists, as the only exception, those who are notorious for having inflicted violence on the clergy.  From these lines, we argue that the Church is granting permission to the faithful to receive the sacraments from heretics who have not yet been expressly denounced by name; and, therefore, that she allows the latter to retain their jurisdiction for the valid administration of the sacraments, since otherwise the concession granted to the faithful would mean nothing. 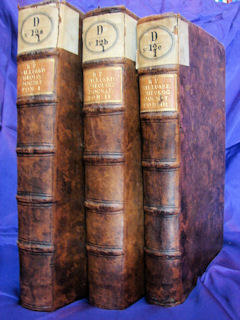 "Our argument is confirmed by the current praxis of the entire Church; for no one today ... avoids his pastor, even for the reception of the sacraments, as long as he is allowed to remain in his benefice, even if the man is, in the judgment of all or at least of the majority, a manifest Jansenist, and rebellious against the definitions of the Church; and so on with the rest.

"I have said in my thesis, 'unless they depart from the Church of their own accord'; for, by the fact that they depart from the Church, they renounce her jurisdiction, and as a result we infer that the Church does not continue to give it to them.  ...  If manifest heretics had to be avoided before their denunciation, this would endanger souls and generate anxiety of conscience, since there would be uncertainty as to who are manifest heretics, some persons affirming, and others denying, as actually happened in the case of Jansenism.  It is very difficult for lay people to know with certainty if someone is a manifest heretic or not, since in most cases the subject-matter of the heresy surpasses their understanding.  For all these reasons, the Council prudently decided that only those who have been denounced would have to be avoided.  These reasons, however, do not apply anymore once the heretic leaves the Church of his own accord.

"Nor does it follow from this—as if there were parity—that no one should be considered a public sinner unless denounced; or that, consequently, the Eucharist cannot be denied to any sinners except those who have been denounced.  The difference is, first of all, that the law and praxis of the Church require that a heretic be denounced before he loses his jurisdiction, not for his own benefit, but for the benefit and tranquility of the faithful.  But the Church does not require a denunciation for someone to be considered a public sinner, or to be repelled from Communion, because the welfare and tranquility of the faithful do not require that.  Also, it is not the business of the faithful to pass judgment on the jurisdiction of their ministers, and often it is impossible for them to do so; but this pertains to the superiors who grant the ministers their jurisdiction.  It pertains to the ministers, however, to pass judgment on those who receive the sacraments. ...