1) Objections presented by Fr. Kramer
2)   ...
___________________
True Meaning of Bellarmine's Ipso Facto Loss of Office Theory (Full Article)
This lengthy article includes recently translated material from Bellarmine that clarifies his true position concerning how an heretical Pope falls from the Pontificate.  This new material proves that every Sedevacantist apologist for the past 40 year has misunderstood and misrepresented Bellarmine's 5th opinion, and that the way in which we interpreted Bellarmine in True or False Pope? is exactly correct.
The article shows how Bellarmine refuted the Sedevacantists of his day (the early Protestants), with an argument that applies equally to their Sedevacantist counterparts of our day, and in fact is the same argument we have used against them.   We also quote the counter argument that a 16th century Lutheran scholar used against Bellarmine in an attempt to defend his Sedevacantist position - which just so happens to be the exact same argument that Fr. Cekada, Fr. Kramer, Mario Derksen of Novus Ordo Watch, and the other Sedevacantist apologists of our day have used to defend the same error against us!
We also address the key issue of how the Church can judge that a Pope is a heretic, while he remains Pope, without violating the Pope's personal immunity from judgment ("the first see is judged by no one").
Lastly, we end by refuting Fr. Kramer's embarrassing new error concerning the charism of infallibility, which he mistakenly believes a Pope can only enjoy if he possesses the virtue of faith "as its dispositive habit."  Full article here.
John Salza on Freemasonry's Infiltration of the Church (October 2020)

* Two Bishops in Every Garage, by Fr. Cekada
*  Robert Siscoe on Modernism and Pascendi (video)
*  Fr. Cekada Recognizes and Resists Pius XII
*  Questioning Fr. Cekada's Judgment: He advocates death by starvation for the innocent Terri Schiavo
* John Lane Taken to Task by Two SSPX Priests
*  Apostolicity of Membership/Origin: How it refutes the Sedevacantist heresy
* Do The Recent Canonizations Prove The Sedevacantist Heresy? (10-9-20)
* John of Torquemada on Resisting an Erring Pope (10-8-20)
*  Ron Conte's Errors On Vatican I and the Unfailing Faith of Peter (9-16-20)
*  Cardinal Billot on Membership in the Church
* Br. Bugnolo’s Attempt to Redefine Dogmatic Facts Backfires: He Ends by Proving Francis is the Pope
*  Cardinal Ratzinger: "Benevacantists" are outside the Church
* More Flagrant Dishonesty from Br. Alexis Bugnolo
* Br. Alexis Bugnolo redefines "dogmatic facts" to justify "Benevacantist" schism
* Ann Barnhardt is a Liar and a Fool (2-21-20)
* Fr. Kramer's Canonical Confusion (Siscoe vs. Kramer) (1-21-20)
* Can we Recognize and Resist? (CFN)
* Fr. Kramer's Error on the Unfailing Faith of St. Peter (11-27-19)
* Peaceful and Universal Acceptance quotes- from the 15th to 21st Century
The Bonds of Unity with the Church (Reply to John Lane) 10-13-19)
* What is the intention to "do what the Church does"?
* Five Opinions of Bellarmine on the Loss of Office for an Heretical Pope - Part I (9-4-19)
* 19th Century Treatise on the question of an heretical Pope, by Dominique Bouix (5-14-19)
* Dogmatic Fact: The One Doctrine that Proves Francis is the Pope Part I (5-11-19)

"A comprehensive and definitive refutation, firmly grounded in ecclesiology, has been sorely needed. We thus pray that "True or False Pope?" finds its way to many Catholics of good will. Mr. Salza and Mr. Siscoe’s book will surely afford much clarity to the reader." ~ His Excellency, Bishop Bernard Fellay

“True or False Pope? is simply luminous. Covering a vast territory with unique clarity, it surpasses every work of its kind and is arguably one of the most important books written on the post-conciliar crisis.” ~ Fr. Steven Reuter, Professor, Natural Law Ethics, St. Thomas Aquinas Seminary

In this four part series, we will reply to Fr. Kramer’s 250 page attack on True or False Pope?  In Part I, we will address three key “heresies” Fr. Kramer accuses us of holding concerning the specific issue of how heresy severs a person from the Church, from which are borne the two main straw man arguments he attacks throughout his book. We will demonstrate that all three accusations are entirely false by quoting directly from our book.  Once these accusations of heresy are shown to be false, the two main straw man arguments – which together constitute the foundation he spends most of his time attacking - will be removed; and when the foundation is taken away, all the arguments and false accusations of heresy erected upon it will crumble (which will then require that Fr. Kramer re-write his entire “refutation”).

In Part II will clarify some important distinctions, and address a quotation from Mystici Corporis Christi, of Pius XII, as well as a quotation from Van Noort, that Fr. Kramer mistakenly believes refutes our position (quite the contrary, as we will see!).  In Parts III and IV, we will discuss the question of how a heretical prelate loses his jurisdiction/office, which is not the same question as how heresy severs a person from the Church (these are two distinct issues). This will include important material that we have never published before, as well as recently translated material from St. Bellarmine that refutes Fr. Kramer’s and the Sedevacantists’ interpretation and application of his opinion concerning a heretical Pope, and confirms precisely what we have been arguing for years.  Click here for Part I 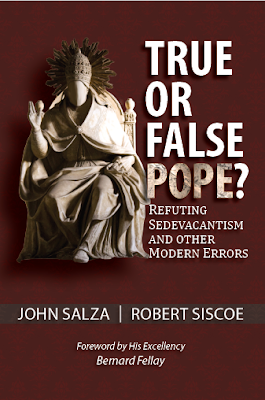 True or False Pope? is the most thoroughly researched, detailed and systematic refutation of Sedevacantism that exists. In this 700 page tome, John Salza and Robert Siscoe present material from Popes, ecumenical councils and Doctors of the Church that you will never find on a Sedevacantist website. Quoting directly from today’s leading Sedevacantist apologists, Salza and Siscoe reveal how Sedevacantists have distorted the teachings of their favorite Popes and theologians, especially St. Robert Bellarmine, and how they even contradict each other. The book also reveals the many unfortunate tactics used by Sedevacantists in an effort to “prove” their case.

The authors begin by demonstrating that Sedevacantism logically results in a denial of the attributes (visibility, indefectibility, infallibility) and marks (especially apostolicity) of the Catholic Church. After explaining the bonds that unite man to the Church, the authors explain the distinction between heresy and lesser errors, and how the sin of heresy alone does not sever one from external union with the Church. The authors then go on to provide the most detailed analysis in print of what the Church does in the case of a heretical Pope, based upon the teachings of all the classical theologians who addressed the topic. After a very important explanation of the scope of infallibility (papal, conciliar, disciplinary, New Mass, canonizations), the authors address Sedevacantist arguments against the new rites of episcopal consecration and ordination. The authors conclude by affirming the Recognize & Resist position of Traditional Catholics, and expose in great detail the bitter fruits of Sedevacantism.

This groundbreaking work proves the Sedevacantist thesis is an overreaction to the crisis in the Church, akin to the reflexive “faith” of Protestantism. This explains why Sedevacantists are divided into many competing factions and sects (some of which have elected their own "Popes) that contradict and condemn each other. The book also underscores that the Church is currently suffering a mystical Passion similar to that of Our Lord Jesus Christ. Like those who lost faith in Christ during His Passion, Sedevacantists have lost faith in the Church, His Mystical Body, as it passes through a similar Passion of its own. Having lost their faith in the Church, they have become among her most bitter persecutors. No matter what one’s perspective is on the crisis of the Church, anyone who reads this book will conclude in no uncertain terms that Sedevacantism – one of the great modern errors of our times – far from being a “solution” to the crisis, cannot be held or defended in good faith by any true Catholic.